The Sisterhood of Snarky Stampers Challenge #92 ~~~ J is for Jumble

Wow another two weeks has flown by and it's September already, beautiful days and cool nights. Well I`m not sure who`s brilliant idea for the challenge was but it sure had me in  a panic,  J is for Jumble or make a collage. To some the idea of collage is easy peasy but for me it was that "Deer in the headlights" look. I did have some help with it by following some very good pointers from a fabulous collage maker, Lauren.  So without further chit chat here it is. 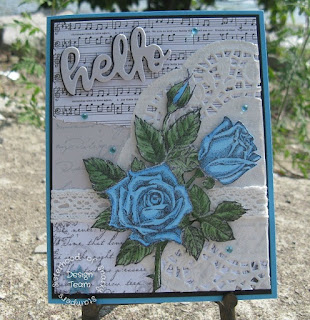 One of my first Stampin'up stamps was the stippled rose and still one of my favourites.   The card talks for itself, Three scraps of paper one doily, some stick on lace and a fussy cut image which has a touch of wink of stella on it as well as some tiny blue gems dotted around.  The Hello was cut twice once in black and once in white shimmer paper and popped up as was the rose. 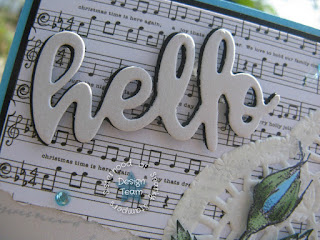 Close up of the Hello. 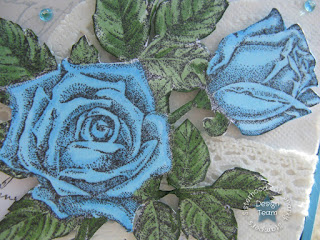 Since I decided this could be used for any occasion I left the inside blank.

Thanks for stopping by and check out the main blog and see what the rest of the design team have "jumbled" up.

I can assure you, Barb, the collage idea was definitely not mine. ;) But I suppose it's good for even the design team to be challenged once in a while, and you certainly met the challenge! I agree, the rose is gorgeous, but part of that is your colouring. Nice!

WOW
Barb your collage card is stunning!
You rocked it sistah!