The Cheerful Stamp Pad and the sponsor is Bugaboo Stamps. It’s the second week of April is your weather warming up? The snow is finally melting but so far there is no flooding. Ok enough about the weather and on to the challenge.
I picked a great image from Bugaboo Stamps if you get a chance go visit them and check out the great images. 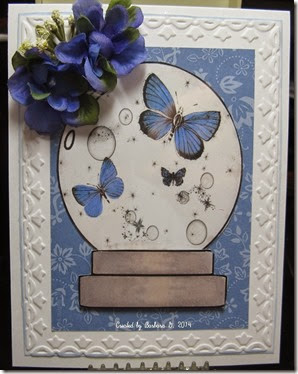 , .
I picked an snow globe image, funny it’s called a “snow” globe and it’s a spring image, lol. I love blue butterflies so coloured them with my blue spectrum noir markers then coloured over them with a blue spica glitter pen. I tried to make a one layer card, it didn’t work, J just can’t seem to get  the CAS thing down. So after I embossed the front of the base with the tulip border folder I decided to trim it and layered it on another white base. I added a circle of clear acrylic to the globe and trimmed it, then cut the base out separately and popped it up. When I decide if it is a get well, or birthday card I will add the sentiment to the base of the snow globe. 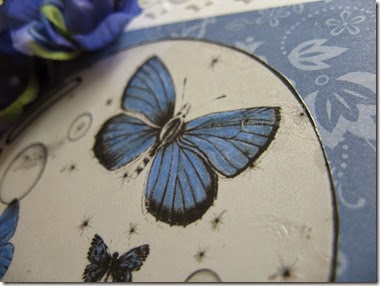 I was hoping you could see the shimmer of the butterflies but it doesn’t show up that well. 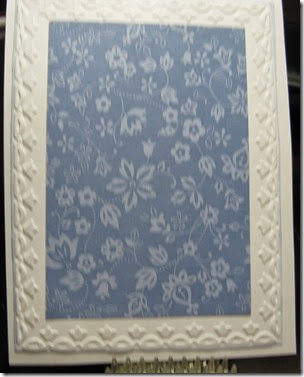 The inside is done the same as the front (without the globe)
I am entering this in the April Anything goes challenge at Catch the Bug challenge Blog.
Thanks for stopping by today and peeking at what I have been crafting. I hope you will find some time to get creative and join us at The Cheerful Stamp Pad for the Add Flowers challenge.
Posted by Barbara Godden at 6:30 AM

That's beautiful, Barb! I have that Bugaboo image too but I haven't used it yet - I love what you've done here! I really like your flowers too - do you remember where you got them? Have a great day!

The flowers I bought a couple of years ago from a clearance bin at Len's Mills store here in Woodstock (ON) it was like a little bouquet and I took it apart and reconstructed them and a pearl in the middle.

Beautiful card Barb! I love the design paper on the embossed frame on the front. And a spring globe full of bubbles and butterflies is just perfect :)

Such pretty blues! I love that your "snow" globe has butterflies in it. I'll take butterflies over snow any day!!!!!

A butterflies and bubbles snow globe? Yes please! Barb, you card is amazing! Love the pretty colors, dp, flowers and the embossing folders you used!

Your card is so so pretty.
It sure makes me think of Spring :)

What a beautiful card, Barbara! Love the embossed frame and the gorgeous spring globe.

A spring globe! What a fun idea - seriously, why let the snow have all the fun?! As for weather - harumph. Our yard is under water, but so far (knock wood) it's not in the basement. Yet.

Your colors are great! I love the elegance of your card! Thanks for joining us at Bugaboo Stamps for our ANYTHING GOES challenge. Good luck in the draw!
luv'n huggz
Jen Leeflang
BUGABOO DT