For the Ode to Lindsey theme at A Tiny Craft (atc) challenge I looked through her posts and found that with most challenges she dug through her stash of inky backgrounds so that was my starting point, she also liked to use die cuts. Although difficult to go through her blog yet again it was a lovely read, her blog posts were always interesting, comical and informative.  I decided to try a drink die I've had in my stash and I might have used it or maybe not. 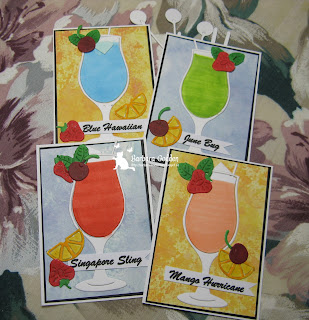 I checked out the fancy drinks that are served in a Hurricane glass, and was so surprised at how many there was. I picked one of my favourites (can you guess which one?) and three that were just pretty and interesting.
First I scrounged around and found some oxide ink backgrounds I bordered them on black and then on an ATC base 2 1/2 X 3 1/2. Then I die cut the die 4 times in white, (14 pieces) and coloured the pieces as shown then paper pieces the drink and lemon slice.  The names were computer generated.
And now a closer look at each one. 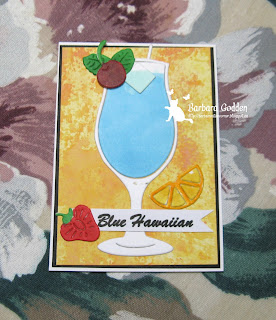 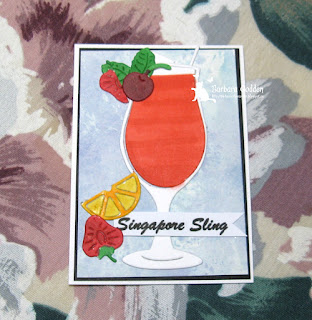 The original Singapore Sling was created sometime between 1910 & 1915 in Singapore.
Interesting fact is that you won't find 2 recipes the same. 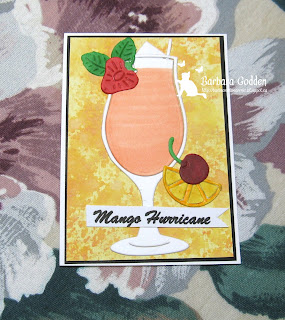 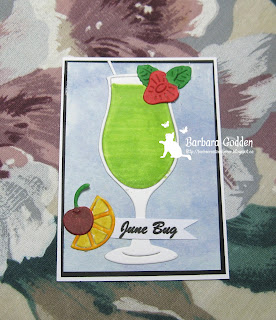 June Bug or June Bug Annihilator was first made in a TGI Fridays Restaurant in Busan South Korea, and is a favourite in most TGIF restaurants.
Stop the presses....I found a purple background just the right size and made one more ATC this one is in a favourite colour of Lindsey, Donna and myself, any other purple lovers out there? 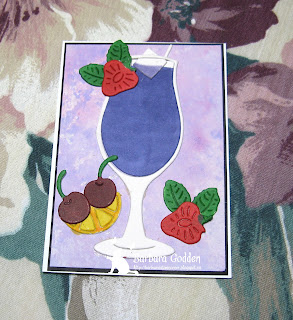 Purple Zydeco
Because this was a late entry the name of the drink did not get computer generated at home, not much history on the drink but it's not any less potent than the other 4. I added a few more fruit die cuts in lieu of a type written name. I'm sure Lindsey would get a giggle over the lemon slice with eyes and feelers.
There you are, my Ode to Lindsey who lost her battle with ovarian cancer in July,
We lost a talented team mate she will be missed by all crafters and friends.
Posted by Barbara Godden at 6:30 AM

Cheers to the purple lovers 💜💜
This is a prefect Ode to Lindsey - the inky backgrounds, the die cuts and of course the fruity beverages
Nicely done sistah 💜

These are all so amazing, Barbara! A wonderful tribute to Lindsey. Hugs!

Gorgeous ATCs, Barb! The different variations are gorgeous! Love all the fruit die-cuts!