The Shopping Our Stash team wants you to honour the Winter Olympics by making a project featuring a SPORT ~~ Any sport you would see at the winter Olympics, Figure skating, Luge, Bobsled, Slalom, Hockey, speed skating and the list goes on and on, I think Curling is on the agenda for this year too. so many options. I chose Women's Hockey!!! I'm a hockey fan, hubby not so much since we only have one tv (on cable) I usually put up with all the dumb stuff men watch for most of the day so I can watch a hockey game. He cheers them on especially when the score is tied, he says "anyone score" just so it doesn't go to overtime  LOL.  anyway here is my tribute to the Woman's Olympic Hockey Team. Go Canada Go. 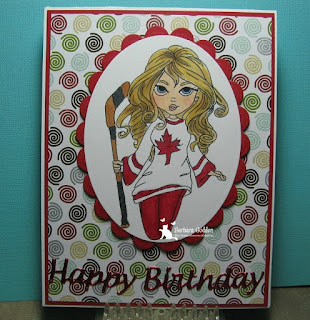 The digital image is from Lacy Sunshine Stamps, I am sure I've had it for two years and havn't used it yet. The background paper is from a Christmas pad also over two years old but I thought the circles looked like the Olympic rings. 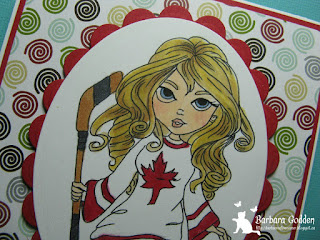 Close up of the image. 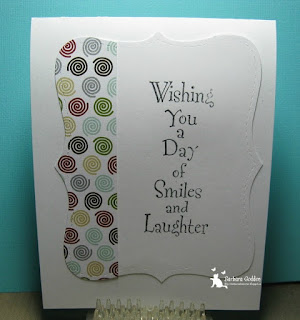 Finished the inside with the leftover scrap of patterned paper and one of the first Birthday sentiment I bought over 15 years or more old.

I would like to enter this in
Seize the Birthday ~~ Anything Goes Birthday. 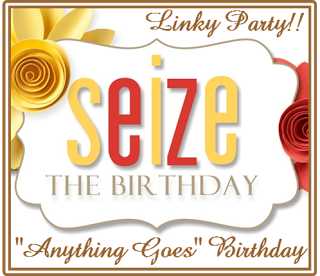 Thanks for stopping by today and head over to the Main Blog and check out what sports the rest of the team have made.

I think you were waiting for this challenge to color up that awesome image! How perfect it is! Great card!

oh my gosh, this is the PERFECT card for the challenge, missus! i confess i didn't even realize there WAS women's hockey in the olympics (sorry... i'm the least sporty person IN THE WORLD, lol!) but now, in your honor, i will route for team canada to win!!! ♥♥♥

What a perfect image for this challenge Barbara, the Olympic Hockey, we'll be cheering for those awesome girls!! this our favorite sport to watch, plus the skiing and the speed skating.
Fabulous card.
Hugs,
Maria.

Fab card Barb!!!
Hockey is about the only winter Olympic sport that I will watch.
Funny we went for a similar theme...like you said - Great Canadian Minds...LOL

This is amazing, Barb! Of course you had the perfect image and paper just waiting for this moment. Thanks for linking up to Seize the Birthday - still waiting for that cake with candles card, though! ;)

Oh, so cool for a hockey-loving sporty gal! Excellent coloring! I love that you used a Christmas pad for that accent paper-- I wouldn't have thought! Great eye! And great interior as well! I enjoy all olympic sports, though I am not generally a hockey fan (I know: so American of me...), but I will definitely pay attention to Team Canada during the events and think fondly of you and Donna!

This is awesome! Go Canada Go! I'm not a big Olympics watcher but always love women's hockey. Great choice for an image. Fabulous colouring and fun paper. Thanks so much for entering this fabulous card at Seize the Birthday.