Wow it's Tuesday and it's Halloween!!! how cool is that. I made my Shopping Our Stash project for my Great grandson and he has received it already.  We made a triangle easel card in a class with a snowflake and the idea for this card was "born"  The first picture of the card it's closed so it's the front of the card as you take it out of  the envelope. You will have to scroll down to see the way it is as an easel card.. 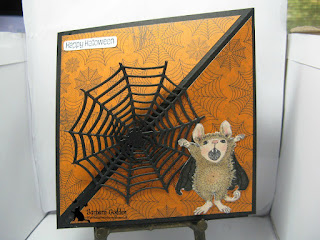 It was hard to get a picture of it as it didn't want to stay flat. I diecut the spider web three times and glued them together for stabilility. there is a spider in the center too and the sentiments are from a Halloween  stamp from Kraftin' Kimme (it has 21 sentiments) 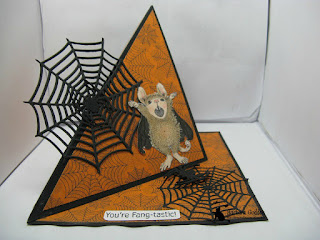 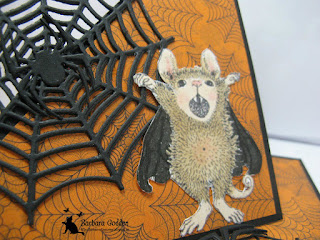 What could be cuter than a house mouse Dracula!!! 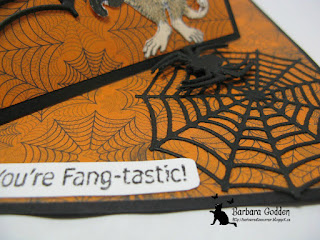 A second sentiment from the Kraftin' Kimmie sentiments, the spider web was only cut onece and flat attached then I layered 3 die cut spiders and popped it up with a black pop dot as the stopper.

Thanks for stopping by today on this 31st of October....where did October go????

Ohh!! Barbara, this is an amazing card, love the way it opens and stays open for display.
Your little "Dracula" mousey is just to die for, I adore this image (I don't have this image.....must remedy that ASAP)
Awesome and oh so adorably spooky card Teammie.
Hugs,
Maria.

pretty sure there is NOTHING cuter than house mouse dracula, lol! he is BEYOND cute! and your triangle easel card is SPOOKtacular, missus! (seriously, i cannot even imagine how you did that?!) happy halloween!!! ♥♥♥

Ohhhhhhhhh this is awesome Barb!
Another fine example of your super duper House Mouse skills!!

Where did the year go?!
Such an adorable card!!
Love that little House Mouse Dracula

Too cute to spook and an awesome card for our anything goes/preparing for Christmas challenge...thanks for joining in .xx
{aNNie}Designer for House Mouse and Friends

Fabulous design and great Halloween colors. Love the little mouse in his costume. Thanks for joining us for the House Mouse and Friends Monday Challenge.

This is fantastic! Love the spiderwebs and I hope it's okay to say that Dracumouse is very cute.

What a sweet little spooky Mouse! And the card is so beautiful. I hate spiders and spiderwebs, but i love Halloween. Yesterday about 40 kids got sweets at our front door.
Good luck for the challenge!
Kind regards from Germany
Gabi

Barbara it's a fantastic Halloween card

Thank you for playing with us at House Mouse and Friends Monday Challenge.
Goodluck and hope we see you again.

Thanks for sharing with us @ House Mouse & Friends Mon chall.

Great fun barbara and such a fab card shape !! Thank you so much for sharing it with us at HMFMC !!