It’s Saturday and time for a new Challenge….it’s a Thing

Challenge #149 at the Drunken Stampers the theme is THING and the thing is CHIPBOARD!!! Team Yellow Canary has lots of inspiration on the blog so don’t forget to head over and check them out!! 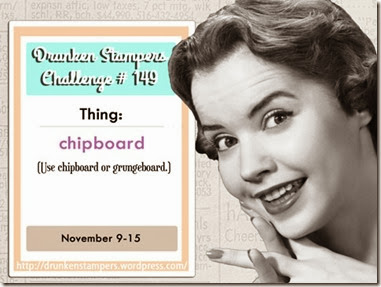 Chipboard is not one of my usual things to work with, I have some coasters (from the bar) and some chipboard letters as well as some odd buckles and other pieces too but really don’t know how to utilize them. I have been thinking for two weeks on how to make something work, the first two ideas went out the window, I knew I wanted to make a Christmas card and once I decided on the stamp it went together quickly. Here is what I came up with……. 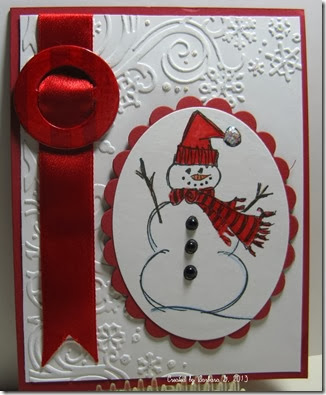 The stamp I used is one of the first stamps I bought when I started stamping, it is from Hero Arts  and is called Sketch Snowman. I embossed the white layer with a cuttlebug folder from the Winter Wonderland set, the ribbon was off a gift package, I knew it would come in handy one day. lol. 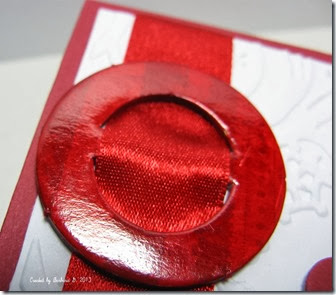 Here is a close up of the chipboard piece I used. I tried to paint it with acrylic silk paint but it just beaded up then realized it was shiny and wouldn’t stick so I got out my trusty Bic markers and covered the buckle with the red ink, it turned out better than I thought it would, it looks shiny and because of the pattern on the chipboard it give dimension to it. So now you have seen what I have done and have checked out the other Yellow Canaries work it’s your turn to join the fun at the Drunken Stampers for the Theme/chipboard challenge.
Thanks for stopping by today and come visit again soon.
Posted by Barbara Godden at 7:08 AM

Brilliant idea to color that chipboard buckle with a marker! It looks fabulous, as does your entire card!

Great job with that buckle Barb!!!
Glad I am not the only one who keeps ribbon off gift packages LOL

Nice job on how to use the chipboard :) and the snowman well who can top that ..soooo cute...tfs

Oh this is awesome! LOVE that it came from the bar (so in tune with the challenge, lol!) and the marker really made the texture shine through :)

I love the snowman. OK, I really love all snowmen, and penguins, but I'm a sucker for winter. I think your card is simply beautiful!

Your card is stunning.
I love love the pop of red against the white.
Your chipboard buckle turned out perfectly.
I also use alcohol inks on my chipboard. I like that the pattern comes through.
As for the colics being cheaper in the U.S. I don't have anywhere near me that sell the Copic markers…as I have all the markers, I picked up some refills.

I love that glossy red chipboard element! And I really like the snowman stamp, too. Great card!